Inquiry into deprivation and disadvantage in coastal rural areas

The APPG is a group of MPs and Peers, across all parties, who have a shared interest in coastal areas. They meet at least three times during the year, along with other stakeholders, to debate issues of common concern. As Parliamentarians they have a unique insight into government and an inside track on national policy. It is the only body which brings people together at a national level to consider UK policy in coastal areas. Established in 2006, the group has to date tracked the progress of the Marine Bill, and has investigated the issue of social justice in coastal flood and erosion policy.

Through the APPG, and CoastNet’s wider work, there is anecdotal evidence that there are some rural issues of concern that are peculiar to the coast. How universal are they, and are they sufficiently different from the norm to warrant special attention? Examples include: proportion of holiday homes and associated impacts; isolation from services; poor quality former holiday accommodation now in permanent housing; high vulnerability of ‘permanent’ holiday park residents in flood risk areas.

To gain a better understanding of these matters the APPG has determined to undertake an inquiry, as follows:

Purpose: To establish the factual basis regarding whether the coastal rural areas differ from inland rural areas, or from the general situation in the UK, with regard to a range of measures of deprivation and disadvantage.

Scope: It is proposed to take a whole UK approach. Where it is possible, the inquiry will attempt to establish why matters are different where this is shown to be the case. However, resource constraints will limit the scope of the analysis. Defra definitions of rural settlements will be applied.

Approach: A panel of MP’s (minimum of three, cross-party) will be established by application. A general invitation to submit evidence will be widely distributed. Evidence submitted will be logged, then categorised. A selection of respondents will be invited to attend oral evidence sessions of the Panel of MPs, of which there will be no more than three sessions. An expert group drawn from the Inquiry Coalition will analyse the evidence and write the final report. CoastNet will coordinate the whole process.

Timing: The deadline to submit evidence will be 30th March 2009. Panel meetings will take place between April and June. The Inquiry will report in October 2009.

Partners: A small coalition has been established to contribute to this work. It comprises CoastNet, the Commission for Rural Communities, the English Local Government Association (through the coastal special interest group), and Exeter University (Geography Department).

First and foremost we require a written summary setting out separate points of interest and concern clearly and succinctly. For example, a single issue might comprise a number of separate points of concern: a coastal settlement characterised by a higher level of multiple deprivation might exhibit a number of underlying factors such as poor access to services, a vulnerable elderly population, or poor quality housing stock for example.

Please take time to think through the issues that you want to present to us carefully, so that you can draw our attention to underlying factors wherever possible, rather than simply the more obvious impacts of the issue.

You may have undertaken some research into these issues yourselves, or be aware of research by others. Electronic copies of such material will be welcome, as annexes to your summary.

Your evidence will be made public on the CoastNet website.

Please ensure that your submission has been officially sanctioned by your organisation, where appropriate. We understand that this can be a lengthy process in some organisations, and we will accept draft versions in the interim.

We will only take evidence in electronic format. You can submit online at:

If you have any difficulties please phone CoastNet on 01206 728644 or email admin@coastnet.org.uk

Fight is on to stop more dredging in Gower

Thisiswales.co.uk reports that campaigners aiming to protect beaches in the Gower area of South Wales are vowing to step up their fight against a building firm's sand dredging plan.

According to the report, Llanelli Sand Dredging is still hoping to get permission from the Assembly to dredge material off the coast of Swansea Bay.

However, concerned residents and local groups, who insist the process damages the region's beaches, said they were gearing up for the release of key data on the environment.

The report said their cause has won the backing of Tory AM Alun Cairns, who is calling on more people in South West Wales to get on board with the campaign.

He said: "I remember a meeting when some researchers claimed the levels of sand on Gower beaches was increasing. If such claims are repeated, we need to be in a position to reject them immediately. If we aren't going to scrutinise the data collected, then who is?"

Llanelli Sand Dredging currently collects sand from Nobel Banks, out in the Bristol Channel, but wants permission to take sand from the much larger Helwick Bank.

It has a temporary licence to dredge until August, but is not allowed to start work until data on sand levels is released. A date has yet to be confirmed.

The WAG report on dredging the gower.

The people of South Wales need to fight for their beaches. Please write to the powers that be using the arguments in the comments on this post. 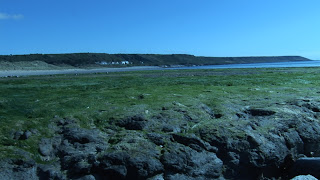 Use the arguments outlined in the comments of this Post - they have been submitted by the Gower Society and Gower SOS. Also add your comments here. . . .

VISITORS BEAR WITNESS TO BEACH'S ROCKY ROAD
Sand has been disappearing from Gower's beaches and many people suspect they know why. South Wales Evening Post Environment reporter RICHARD YOULE takes an in-depth three-part look at the row over dredging. Here's his report in the comments link below.
at 10:24 5 comments:

Thanks to the WAG - more Gower beaches are now targeted to be destroyed - like Porthcawl and Port Eynon. Please write to Rhodri Morgan and Jane Davidson ( so called Environment Minister ) There will be an organised protest very soon.
at 20:26 6 comments: 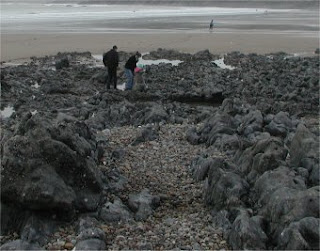 As we wait for the Welsh Assembly decision on continuing and possibly increasing aggregate dredging of the Helwick sand bank, evidence is still flooding in on the damage already caused. Left is a picture of Caswell Bay from the East side. The family are helping their child across dangerous rocks, this was thick sand 20 years ago. I know as I used to run across sand between the two big rocks in the foreground onto more sand.

All these pictures are the tip of a huge issue developing on Gower and other beaches. 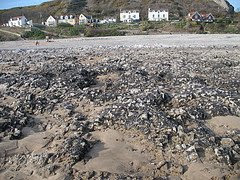 Claire is highly concerned about Horton and Port Eynon with extremely good reason. The picture of Horton Left has been used on the right hand sand of this web blog to help illustrate the devastation that has been caused by dredging the Helwick and other inshore sand banks over the past years. Check out Claire's other shots from April 2007 here.

We must urge the WAG to take immediate action to halt inshore dredging. The evidence is piling in from witnesses of the mass destruction of one of Wales last natural resources.
at 20:41 3 comments: 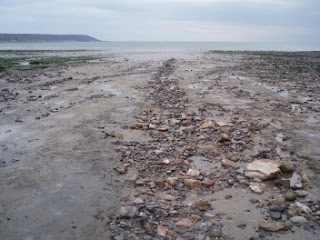 Loss of sand affects local Tourist Attraction.
This will have a direct impact on this respected and popular attraction and affect other businesses related to tourism.
Swansea and Gower rely heavily on visitors to boost the local economy.
The dredging of sand from the Helwick sandbank must have had an influence on the erosion of sand from Port Eynon beach. In the light of this recent evidence the Welsh Assembly Government must reconsider any decision to grant further dredging so close to Gower's precious and beautiful coastline. CLICK COMMENT BELOW FOR MORE
at 10:53 3 comments:

As sole representatives of the new and exciting sport of kitesurfing in the Gower area, GowerkiteRiders (GKR) feel we have a moral and ethical obligation to support the SOS foundation, helping to preserve this unique Gower coastline environment for our business livelihoods but more importantly for future generations of people to enjoy. CLICK COMMENT BELOW FOR MORE
at 09:44 1 comment:

Download it and display it - link to the site

Ship wreck in the sand

View over Pobbles to Three Cliffs to Oxwich

Family fun all year round

Rocks coming through the sand

A sand Gaper in the sand

1-2 Thousand found on the beach 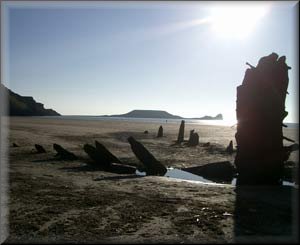 Is there more showing???